In past articles I've written that if you want to know a pattern's original intent, it's important to study earlier versions. The ITF patterns have changed in subtle ways between General Choi's 1965 book and his 1983 Encyclopedia of Taekwon-Do; most of these changes have been compiled by Matt Gibb. But the kukki-taekwondo patterns appear to have changed as well. By happenstance I came across some changes to the 9th-dan poomsae Ilyeo. You can view a video of the form below:


The strange thing about Ilyeo is its asymmetry. Movements are repeated, but on the same side. The diamond block in right back stance (R.B.S.) is performed four times in total. The only symmetric set is the front kick followed by the flying side kick at the end of the pattern. This is strange since all the Kukkiwon patterns, except the Original Koryo, are symmetric.

Anyway, Ilyeo includes a weird stance called "reverse crane stance" (ogeum seogi). It comes from the kata Chinte and is also found in the ITF pattern Se-Jong. It is performed by raising one foot behind the knee of the standing leg.
I noticed that videos of Ilyeo differ in the hand motions during the stance. Some utilize a right spearhand thrust, others a left. Some use one and then the other -- since the stance occurs twice in the form -- but not always in the same order.
Confused as to which version is correct, I asked Ørjan Nilsen of Traditional Taekwondo Ramblings to look up older versions of the pattern for me. He sent me the 1975 version (from Taekwondo Poomse by the World Taekwondo Federation) and the 1986 version (from Tae Kwon Do Textbook Vol III by Kim Jeong-Rok).

According to the 1986 version, for the first crane stance a left spearhand is used, while for the second a right spearhand is used. These instructions match the video above, although in some older videos the opposite is true.

But there's something different about the 1986 version: the fourth diamond block is in a left back stance (L.B.S.). You do a three-quarters turn into it after a left hand punch. 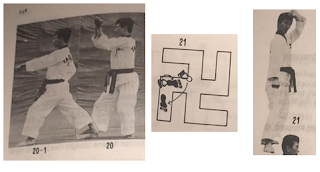 If you travel further back in time to the 1975 version, the text instructions are symmetric. At least, movements are performed equally on both sides (with the exception of move 1). So the diamond block is performed twice in R.B.S. and twice in L.B.S. In this version of the pattern, the spearhand is always performed on the side of the raised leg, but you perform once on either leg. 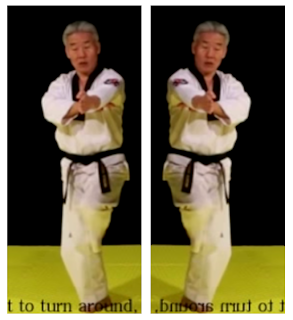 There is some ambiguity because the images in the 1975 book don't match the text instructions. Case in point: even though the text says that the second side kick should be with the right leg, in the image you see the left leg used. 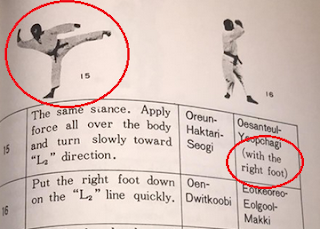 Nonetheless, text instructions for a symmetric Ilyeo exist, and that makes sense given the other poomsae are symmetric. This begs the question: why was the poomsae changed? Why are the two spearhands mirrored when the stances are not? The original name of the pattern was Silla, after the ancient Korean kingdom. It was later changed to Ilyeo, a Buddhist term meaning "oneness". From the taekwondo wiki:


일여 (ilyeo) refers to the Buddhist concept of oneness of the mind and body, the immaterial and material. The form therefore represents the oneness of mind and body achieved through training, and thus it represents the essence of martial arts. Stemming from Buddhism, the goal of spiritual life is Ilyo, oneness or nirvana. Only in this state is ego overcome. The ideal of taekwondo is Ilyo. It is a discipline in which you concentrate your attention on every movement and in doing so, shed all worldly thoughts and preconceptions.

Perhaps the repetition in modern Ilyeo is intentional, like a Buddhist mantra. I personally prefer the symmetric version, however.

One of the applications of the supported spearhand is a throw where the head is hooked (spearhand) and the small of the opponent's back is pressed inwards (supporting hand). The leap forward in Ilyeo can aid this throw. So what is the use of the reverse crane stance?

In the case of the left spearhand, which appears to be the original version, you can perform a leg hook, called a "ko uchi gake" in Judo. It's an unusual throw for a taekwondo form, but then again the stance itself is unusual.

Email ThisBlogThis!Share to TwitterShare to FacebookShare to Pinterest
Labels: Ilyeo