Previously I discussed how the turn into the x-knifehand checking block in Choong-Moo could be used as a strangle/blood choke. Strangles are rare in forms compared to locks and throws, due to the time it takes for the opponent to go to sleep, but they do show up from time to time. There is a strange set in Ul-Ji which may possibly be used as a sliding collar choke.

We begin by using the twin side elbows to pull the opponent's left arm while getting a side headlock. This is similar to Judo's "stomach armlock", although here the purpose is to hook the head, not break the arm. 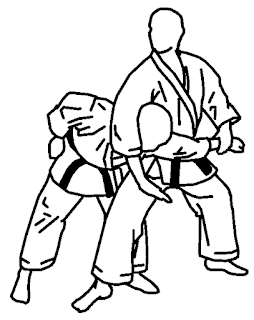 Another difference of course is that the right foot is next to the left, not in front of the opponent. In fact we use the next movement, the cross step, to trap the opponent's left instep. We may then collapse both of the opponent's legs by lifting our right knee behind their left knee, then kicking the back of their right knee with the side kick. The purpose of this is to force the opponent to either fall to the ground or bend backwards, which will make the choke easier.

Grab their left collar with your right fist. Slide your left fist under their left arm and grab their right collar. Pull out horizontally with both fists to choke.


Why the second cross step? If you are sitting down, it's typical to wrap your legs around the opponent's torso to prevent them from escaping, as shown in this video. In the absence of a torso, this looks like you are crossing your legs. This is, of course, a gi choke. It will only work if your opponent is wearing a jacket or similar.