The use of gloves in combat sports has led to the exclusive use of closed fists as a hand striking tool. But in bareknuckle fighting, striking with the front fist is risky due to the chance of breaking your small finger bones on the opponent's skull. This is why, in my opinion, most punches in TMA forms are aimed at the rib or solar plexus level, while the head is reserved for other hand strikes. Bareknuckle boxing manuals also note the problem of punching with an unprotected fist, which is why the backfist ("chopper") was a favored tool to mix in with punches.

TMAs contain a number of hand strikes outside of punches and backfists. These include the: 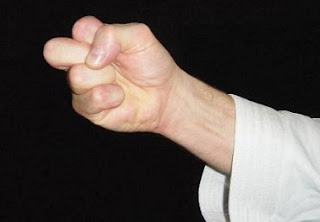 The latter shows up in Gae-Baek, Choi-Yong, So-San, and the KTA poomsae Cheonkwon. It is performed either straight out or upwards like an uppercut.

The important thing to know about this strike is that it is not meant to be aimed at the throat or jaw, even though that's how it may look in the above mentioned forms. Rather, the middle knuckle fist is traditionally aimed at small, vital spots such as the temple, solar plexus, philtrum (small area between the mouth and the nose), side of the neck, and the armpit.

Yes, really, the armpit. There is a nerve cluster there that you can find on yourself by striking lightly with your middle knuckle. You should feel a tingly sensation when you hit. Supposedly striking this hard enough will deaden the whole arm. In Gae-Baek this allows you to use the next movement -- the nine-shape block -- as an armlock without resistance. The double knuckle fist uppercut in Cheonkwon is likely aimed at the armpits as well, perhaps as a defense against a double grab.

What about the straight knuckle punch in Choi-Yong? Here I don't prefer the philtrum as a target because while it may push away the opponent, is it unlikely to end the fight. We can use the previous movement in the form -- cat stance forearm guarding block -- as an armlock to turn the opponent. This exposes the side of their neck for a knuckle fist strike.
Alternatively, the guarding block might be a push as you trap the opponent's leg with the cat stance. You then grab and pull in their opposite arm, turning them, as you strike the side of their neck.


[1] The twin index knuckle fist in Choong-Jang is aimed at the opponent's temples. Presumably the index knuckle gives you more motor control to dig in.