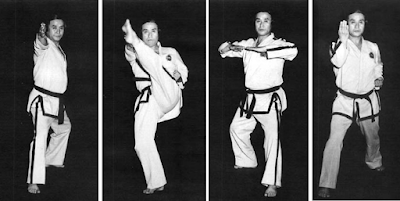 Since I've previously covered a strangle in Choong-Moo and another in Ul-Ji, here is a third one from the final pattern in the ITF system: Tong-Il. While I doubt any readers know this pattern, it's another example of a Judo strangle being used in a pattern. The set is:
In the 1965 instructions, step 11 is merely directed as bring both palms horizontally in front of chest. So the movement is neither described as a block or a strike, and the palms are emphasized.

I considered that this movement might be part of a throw (pushing out with the elbows) or perhaps a downward push. But neither of those two applications match the description of the movement. Instead it may be seen as setting up a single wing choke, or kata ha jime.

Use step 9 to lift and get outside the opponent's right arm. Perform the inward kick not to your palm but to the opponent's leg (although this kick to the palm is in many patterns, it's generally thought this is for show and that the intent is a kick to the back of the knee). This shifts the opponent to your right, placing you behind them.

From here, underhook their right arm with your right arm, and reach around their left shoulder with your left arm. This puts you in the "twin palm horizontal block" position.

See the pictures here for step-by-step details. Or see a video here.

Why are there strangles in the ITF patterns? Judo was a popular martial art in Korea during the Japanese occupation (native Korean arts were suppressed), and most of the original masters of taekwondo had some Judo knowledge, as evidenced by the sections on self-defense and throwing in early taekwondo manuals. Although strangles are not found in these manuals (to my knowledge), it makes sense that some of the strangles from the Judo curriculum would find their way into the patterns.

Email ThisBlogThis!Share to TwitterShare to FacebookShare to Pinterest
Labels: Tong-Il